New Delhi,
The President of India, Shri Pranab Mukherjeepresented the 24th Saraswati Sammaan for the year 2014toDr. M Veerappa Moily, Member of Parliament (Lok Sabha) on Monday . He received the award for his Epic ‘Sri Ramayana Mahanveshanam’ written in Kannada.
Speaking on the occasion, the President saidhe washappy to have the privilege of 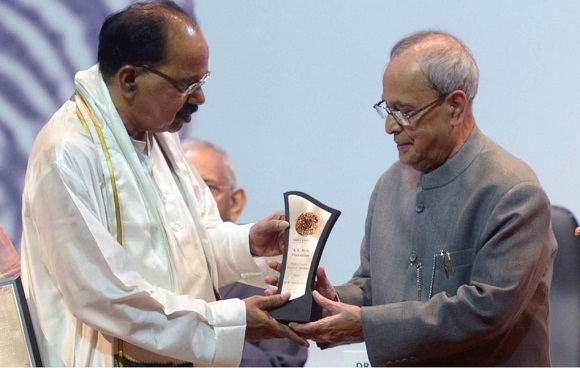 on his fellow Parliamentarian and friend of several decades, Dr. M. Veerappa Moily. He congratulated Dr. Molly for contributing to literature through his prolific writings along with having a successful political career.
The President said in his magnificent composition of 43,000 lines inspired by the original epic of Valmiki, Dr. Moily has shared with us his unique insight into contemporary situations. He has then addressed them through the prism of the eternal principles of good governance, high morality and righteousness. He has shared his belief that present day India has a lot to learn from the Ramayana – especially that our nation-building effort must be based on the strong foundation of tolerance, pluralism and inclusiveness.
The President said that just as good prevails over evil in the Ramayana – and Gandhiji’s words “Satyamev Jayete” remind us that truth alone triumphs, Moilyji’s epic brings to us such ageless values as compassion, self correction and discipline in thought and deed. In Dr. Moily’s message, an echo of his own perceptions – that our democracy can only flourish if there is an active Parliament, if the representatives of the people have a clear vision, if their efforts are supported and supplemented by a diligent Government and an independent judiciary. Additionally, the system depends on a responsible media and a vigilant society. The composition could truly be called a milestone – not only in the realm of Indian literature; but in the tradition of the Ramayana.