Shivaji Sarkar*
The radio and television are change agents for India. The radio when started in late 1920s was a surprise. Its access, broadcast and listening, was limited but still it made waves. It won the hearts as Calcutta (Kolkata) Radio station broadcast an early dawn music programme of Mahishasurmardini, chanting of the Devisapatshati on Mahalaya in late 1938. Suddenly radio became popular and other few stations tried to do similar programs.

The Television as Doordarshan started its initial programme in 1959 from Delhi with equipment presented by West Germany. It was a black and white wonder and was called pictorial radio. The viewership was limited and the nation wanted such pictorial coverage. But despite setting up many telecast centres mainly in state capitals, its real expansion happened many years later in 1982, when colour telecast was introduced in the country to coincide with the Asian Games which took place in Delhi during November-December 1982.

Radio
In its early years, Radio remained confined to affluent homes as radio sets were not considered affordable. Its name Akashvani was given by Noble laureate poet Rabindra Nath Tagore. Netaji Subhash Chandra Bose’s Indian National Army set up the INA radio. Its broadcast of Netaji’s speech during the height of the World War II despite its limited listening was the household talk. It gave a fillip to the freedom movement. During Quit India Movement too, Usha Mehta and Dr Ram Manohar Lohia operated the underground Radio.

Still radio was not in the popular realm. Two things changed it. One was the Hindi film commercial sponsored programmes from Ceylon (later Sri Lanka) radio, and its most popular Binaca Geetmala anchored by Amin Sayani and the introduction of transistor radio around 1958, changed the dynamics of radio. Transistor made it a household object and Geetmala brought programmes closer to the hearts of the people. The AIR had to change its guarded official look to a popular and a bit non-elitist film-song and movie-artiste based and later commercially sponsored programmes through Vividh Bharati – Akashvani ka panchrangi karyakram. It made radio the buzzword and helped it reach the village and farmers homes for news, entertainment as well as farm-related programmes. 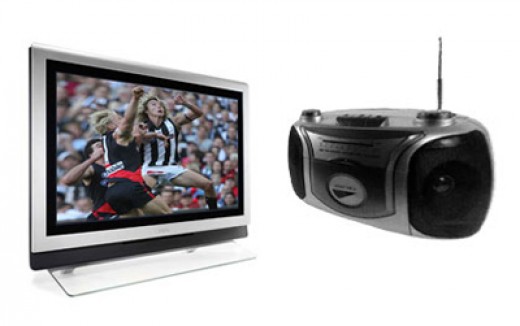 It also aroused patriotism with discussions and its patriotic songs like “zara yaad karo kurbani” sung by legendary Lata Mangeshkar in the wake of 1962 Chinese aggression, 1965 Pakistani aggression and 1971 war for liberation of Bangladesh even as the US Seventh fleet entered Indian Ocean to deter India. The midnight broadcasts of the then prime minister Indira Gandhi were eagerly awaited till the night of June 25, 1975, when internal emergency was imposed.

Its oblivion was short-lived. The radio technology changed drastically. It was digitalized and computerized. Radio editing became easier and the frequency modulated channels brought radio back to the hearts. Now private FM channels in different languages are competing with AIR. So did the community radio movement in since mid 2000s.

Television
This was the time, mid 1970s, Doordarshan started slowly setting up its stations across the country with limited morning and evening telecasts, news telecast, live Republic Day shows, Sunday evening movie, and developmental programmes. The gradual satellite based programmes and countrywide classrooms in 1980s ushered in a change and led to demand of different sorts of news stories.

The AIR and DD were run as government departments. The opposition often raised objections to the news programmes. A move for independent corporatization gained momentum. It led to the passing of Prasar Bharati Act in 1991. The corporation was formed in 1997 during United Front rule with S Jaipal Reddy as information and broadcasting minister.

The liberalization of DD was also witnessed since 1993-94, when today’s many prime news channels were allowed to start short news programmes on DD. It benefitted Aaj Tak, News 24 and NDTV among others the most.

The DD created its competitors, something possible in a democratic country like India. Hundreds of channels telecasting different kinds of programmes across the country are connecting, educating and entertaining people. Many of these telecasts were facilitated by DD directly or indirectly by the staff trained by it.

As commercial telecasts began, TV access no more remained free. It was digitalized and encrypted to become a billion dollar industry. With liberalization of policies, even foreign stake holding was allowed. Today the myriad channels, shows and free telecasts by Indian and foreign companies have made India a global hub. The dish TV changed the quality of broadcasts – an omnibus platform for all TV and radio channels.

Mann Ki Baat
The 2014 brought a huge change. With Prime Minister Narendra Modi starting his Mann ki Baat on AIR it created a convergence of radio, TV – all TV channels, and dish. The 34th Mann ki Baat broadcast in end July proved that even official broadcasts can boost listening, viewership and ratings of all media, yes even of newspapers.

India’s experiment with radio and TV continues.
The author is a senior journalist based in Delhi. Regularly writes on Socio-political issues.
The views expressed in the article are author’s own.