Canberra (Australia),
The Indian Junior Women’s Hockey Team drew 1-1 against Australia in their second match of the 3-Nations Tournament in Canberra on Thursday. The Australians took the lead through a field goal by Schonell Courtney in the 25th minute, but India found the equaliser after Gagandeep Kaur converted a Penalty Stroke in the 52nd minute. 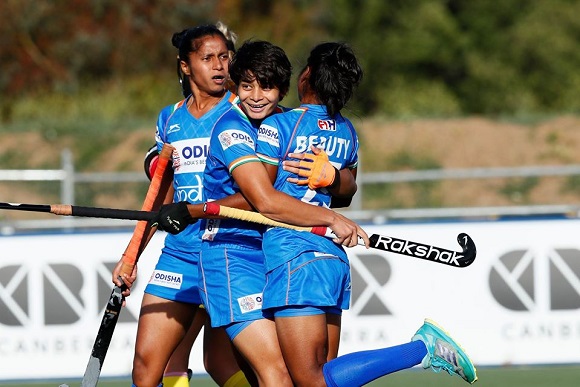 The Indian Junior Women’s Hockey Team started the first quarter on an aggressive note and got into terrific positions to find openings. The Indian strikers stuck to their plans and earned a Penalty Corner in the 10th minute. However, the Australian defense unit stood tall and ensured that the two teams stayed level. India continued to attack their opponent’s corner and won another Penalty Corner just before the break, but the Australians managed to keep India at bay and ended the quarter at 0-0.
The Australian team made a few more in-roads in the second quarter. The Indian defense unit blocked out a few shots but Schonell Courtney found the back of the net in the 25th minute and put Australia ahead. The Indian Junior Women’s Hockey Team tried to fight back immediately, but the Australians ensured that the Indians don’t get a chance to level the score. The two teams played out a high-intensity game for the rest of the quarter as the two teams went into half-time with Australia leading at 1-0.
Australia continued to be the aggressor in the third quarter. They earned a Penalty Corner right away, but the Indian defense valiantly denied their opponents a chance to go 2-0 up in the match. The Indian team found a way to get into good angles, but they couldn’t find the back of the net. The Australians continued to dominate the rest of the quarter and ensured that they stayed in the lead at the end of the third quarter.
The Indian Junior Women’s Hockey Team turned the tables in the fourth quarter. They earned a Penalty Corner early on in the final quarter, but the Australians managed to block out the shot taken by the Indians. However, India were awarded a Penalty Stroke in the 52nd minute and Gagandeep Kaur ensured that the Indian team level the score in the dying minutes of the match. The Indian Junior Women’s Team rode on the momentum and earned a Penalty Corner in the final minute of the game. However, the Australian defense unit stood tall once again and made sure that the match ends in a 1-1 draw.