Bhubaneswar.
The Scientists of Institute of Life Sciences(ILS) had a detailed discussion with the district officials of Nabarangpur as an aspirational district led by Dr. Ajit Kumar Mishra, District Collector of Nabarangpur in Bhubaneswar on Saturday. 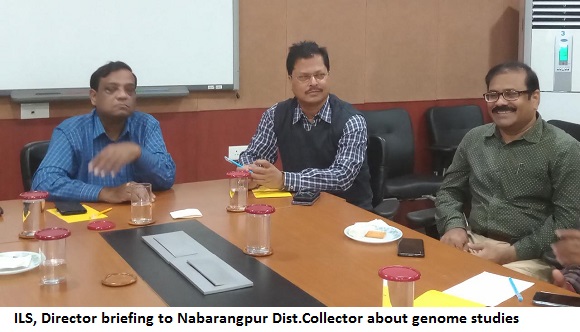 The purpose of this discussion was to solicit support from district administration for undertaking high technology based analysis of genome, immunological metabolic, nutritional and microbiome parameters of tribal population of Nabarangpur district. This programme is being carried out as a part of ILS flagship programme on tribal health and nutrition. The Scientists of ILS will be collecting samples from selected tribal groups in Nabarangpur district during the month of March to assess the diversity in the genome composition of specific tribal groups of Nabarangpur.
Director, ILS, Dr. Ajay Parida mentioned that this analysis will help in establishing unique genetic maps of tribal population, their immunological stability or instability in relation to various diseases and infections, analyze the microbiome composition in the gut environment as well as various metabolic and nutritional parameter. This study will pave way for population specific strategies for better management of their health and nutrition study particularly among the tribal groups. In a later stage large number of individuals will be included for analysis in a national programme of “Genome India” for cataloging genetic variation among India population.
The Collector, Dr. Mishra mentioned that ILS is currently involved in a programme for economic empowerment of tribal communities of Nabarangpur under a DBT and RKVY Programme supported in partnership with RMRC, Bhubaneswar and KISS University and expressed his satisfaction with the progress the project has contributed for benefit of the tribal community of Nabarangpur.